Firstly, a Hindu temple when viewed from the outside is almost a solid mass, one can say an abundance of “architectural flesh”. By the way, there are enough images of human and humanoid flesh in it. The walls of the sacred buildings are almost completely covered with sculptures. In essence, this architecture works as a huge basis for bas-reliefs and high reliefs, where there is certainly an abundance of flesh, moreover, sometimes this flesh is also occupied with “carnal pleasures”, and, as a rule, in acrobatic positions and an unimaginable combination of men, women and maids assisting them (the Kama Sutra, by the way, is also a way to escape from the wheel of samsara).

Secondly, if you look closely, Hindu architecture is not at all alien to attention to tectonics, and the design of rack-and-beam structures has about the same logical structure as the classical order familiar to us. The eye will easily distinguish in it both the supports, and the capitals, and the architrave beams of the entablature.

The architecture of Islam, including that built in India, looks completely different. Actually, there is no single style among the followers of the Prophet Muhammad, because so many peoples, each with their own cultural heritage, were under the power of the Word revealed to him. But, of course, Islamic art also has common features, thanks to which we easily recognize its monuments wherever we meet them. Almost all Muslim architecture, with the exception of those cases when it developed under the direct influence of Byzantine prototypes, avoids even a hint of “carnality”, any indication that an inert material is hidden behind the visible surface of the wall – stone, brick or concrete. Islamic buildings, of course, are three-dimensional, but both the external volumes and the boundaries of internal spaces seem to be formed by flat surfaces that have no thickness, they look just fancy ornaments or sacred writings, flawlessly applied to the finest facets of disembodied crystals. Most of all, this is similar to ideal constructions in geometry, where a point has no diameter and a plane has no volume.

At the same time, Islamic architecture feels free from tectonic logic, the laws of which are more or less obeyed by both Christian architects and Hindus and Buddhist builders. The carried parts here are “weightless”, they do not put pressure on anything, which is why there is no need for the carriers to demonstrate their power: where there is no mass, there is no weight. 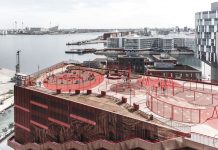