Italian futurism began as a movement of artists and writers and spread to architecture in the visionary work of Antonio Sant’Elia. Although he built little and lost his life in the First World War, Sant’Elia produced stunning architectural drawings that had a lasting influence on later architects, including members of the modernist movement and practitioners of Art Deco.

The phrase “movers and shakers” is rather overused, but it does contain an important notion: that every so often a person or a group of people comes along who change history by shaking things up and moving things along. They do not necessarily produce very much, but they make a lot of noise and make people think. Nowhere is this more true than in the case of the artistic movement known as futurism.

Futurism began in 1909 as a movement of writers and artists. Like many people at around this time, the first futurists, who came from Italy, believed that the current art was outmoded and unfit for purpose in the modern world of the still young 20th century. Writer Filippo Tommaso Marinetti launched their movement with a manifesto, published in an Italian newspaper on February 5, 1909, and then in France, in Le Figaro, two weeks later.

In the manifesto Marinetti and his followers renounced the past. They wanted art that was young and daring and original—even if that originality involved violence. They celebrated technology and speed—they loved cars and airplanes—and were so besotted with everything fast, sudden and violent that they even promised to glorify war in their art.

An architecture for the future

These ideas, absurd and overblown in themselves, produced some striking paintings of running figures, speeding cyclists and pulsating cities. They also inspired an Italian architect, Antonio Sant’Elia, to invent a futurist architecture. Like Marinetti, Sant’Elia produced a manifesto (the futurists favored such documents) to explain his ideas. It calls for an architecture for the future, one that renounces the historical styles and ornament that were current in Europe in favor of an unornamented, bold new way of building. Futurist architecture, says the manifesto, should draw its effects from the frank use of modern materials (concrete, glass, steel) and the daring use of striking forms.

Sant’Elia went on to explain the aesthetics that the proper use of these materials would generate. The futurist city would be “like an immense and tumultuous shipyard, active, mobile, and everywhere dynamic, and the modern building like a gigantic machine.” Technology, instead of being hidden away, should be displayed and celebrated—so elevators, for example, should “swarm up façades like serpents of glass and iron.” Conveyor belts (high-speed, of course) and catwalks would deal with traffic.

“A racing car … is more beautiful than the Victory of Samothrace.” Filippo Tommaso Marinetti, Futurist Manifesto

Architecture should take over not just the ground and the space above it, said Sant’Elia, but should also burrow into it: buildings should “plunge storey deep into the earth.” And ornament should be replaced by a scientific approach to building, in which beauty would emerge through the logical lines and masses of the buildings. Architects should abandon their love of decoration, moldings, porticoes and other antique details, and place their faith in the grouping of masses on a grand scale.

The past, then, was laid aside, and the aim was to find a new way of building that truly lived up to modern needs, modern technology and the pace of modern life. Sant’Elia developed these ideas in a breathtaking series of drawings of cities—the drawings may have come before the manifesto, but this is not known for sure.

Sant’Elia’s drawings depict not just skyscrapers, but also building types of the 20th century—airports, power stations and so on. Most dramatic are grand apartment buildings, with tall, stepped façades, sweeping roadways and narrow bridges, and dramatic, towering railway stations.

The futurists liked to portray their movement as coming from their own thoughts alone, and representing a complete turning-away from past and present architecture. But Sant’Elia’s drawings owe something to the skylines of American cities, especially New York. They are unique, though, and have been widely admired since they were shown in an exhibition called Nuove Tendenze in 1914.

But they are only drawings. Sant’Elia joined the Italian army and was killed in the First World War before he had the chance to build much. When the war ended in 1918, the world seemed a different place, and in architecture the time for the outrageous claims of the futurists seemed long gone. But architects remembered Sant’Elia’s drawings, and his ideas about the coming together of technology and an ornament-free machine aesthetic. His ideas had an influence on the more straight-laced designs of the modernist architects of the 1920s and 1930s. His sense of drama probably also influenced those who wanted to find a modern route to grand effects—from the architects of Art Deco to Ridley Scott in the film “Blade Runner.” Even in the 1980s the future seemed futurist.

A number of Italian buildings of the period after the First World War show the influence of the ideas of Marinetti and Sant’Elia. In keeping with the futurists’ glorification of speed and transport, among the most notable are railway stations, especially the ones at Trento and Florence (Santa Maria Novella). At Santa Maria Novella (below), designed by Giovanni Michelucci, and built in 1932–3, great sweeps of glazing and strong, simple masses certainly recall the futurists. So, too, does the fact that special access roads and parking areas ensure that the car is as well accommodated in this station as the trains. 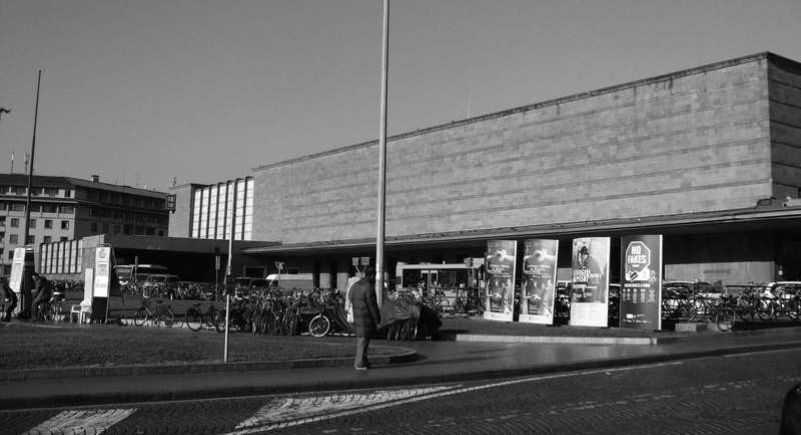