The expressionist movement had its heyday in Germany and the Netherlands in the 1920s. It brought dramatic new forms—curving walls and faceted domes, for example—to modern architecture, giving architects and clients new ideas about how concrete, in particular, might be used. Its ideas lived on to influence some of the more dramatic buildings of the 1950s and 1960s.

The most famous architecture of the period between the two World Wars is in the modernist mode, building that uses materials such as steel, glass and concrete to create mainly rectilinear forms. The architecture of the Bauhaus (see Bauhaus) and of the so- called “International Style” (see International Style) falls into this category. But there was a different tendency, in which materials such as concrete were used to create more organic, sculptural, and sometimes symbolic, forms. This type of architecture has been called “expressionism.”

Whereas the buildings of the Bauhaus and International Style were all straight lines and seemed to result from a rational approach to construction, expressionist architecture embraced curves and flowing forms that seemed to bend like rubber, or crystalline forms that reflected the light in a myriad surfaces of glass. It was a type of architecture that gloried in the new shapes and forms that were possible with modern materials.

The main exponents of this type of building were Dutch and German architects and its first major project was a theater, the Grosse Schauspielhaus, built in Berlin after the First World War and designed by Hans Poelzig. The auditorium of this building was dominated by an extraordinary plaster ceiling with rows and rows of pendants that hung down like stalactites. The effect was further heightened by thousands of colored lightbulbs.

One precursor of expressionism is the Czech architectural style known as cubism. In the early 20th century, many Czech artists traveled in Europe, seeking inspiration in centers such as Paris and Munich. When cubist painting began to be exhibited in Paris in 1908, it inspired not only painters from Prague, but also Czech architects. They saw that the broken or prismatic picture planes of Picasso and Braque could be adapted to create similarly prismatic building façades. Architects such as Jan Kotera and Pavel Janák designed buildings full of acute angles and sometimes irregular forms, which formed radical departures from both the classicism and the highly ornate Art Nouveau then fashionable in Prague. 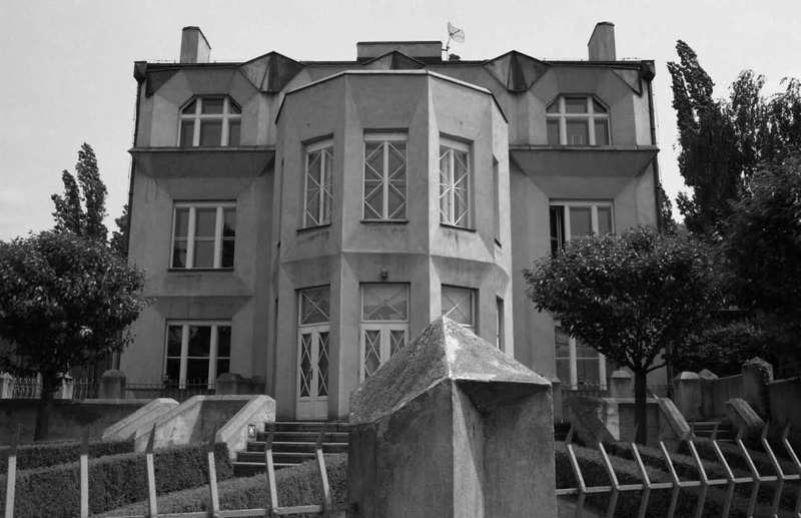 Other types of building

Curves and glittering lights seemed appropriate for the interior of a theater, a type of space in which lavish decoration and fantasy had always been acceptable. But the expressionists also produced designs for more mundane buildings— Hans Bernhard Sharoun’s project for a stock exchange and Erich Mendelsohn’s drawings of factories, film studios and other buildings are notable examples. All demonstrate the possibilities for curving, organic forms offered by steel and concrete.

“A man of genius must constantly renew himself, otherwise he is ossified.” Erich Mendelsohn

Erich Mendelsohn’s most famous building, the Einstein Tower at Potsdam, Germany, is just such a study in curved form. This structure consists of a tower containing an observatory above a low structure containing a laboratory and sleeping accommodation for the people who worked there. The entire structure is a study in curves, and looks as if it has been made by pouring concrete into vast rubber molds. In fact its underlying structure is actually of brick, with the concrete added as a smooth finish.

There was a contrary tendency in expressionism, in which instead of curves, small crystalline facets made up the surface of the building. An early example was the Glass Pavilion in Cologne, designed by Bruno Taut and built in 1914. This was a round, compact building that formed part of an exhibition site, and its most stunning feature was its domed roof, shaped rather like half a lemon and made up of dozens of large diamond-shaped glass panes.

Panes of glass could shine like the facets of a jewel, but walls could be treated in a faceted way, too, folding in and out at odd angles as if they were made of cardboard rather than concrete. The buildings of the Czech cubist movement look rather like this, as does the Goetheanum at Dornach designed by a man who was not an architect at all, the philosopher, writer and teacher Rudolf Steiner. This so-called “spiritual high school” is all angles and concrete ribs rising to a bizarre domed roof. There is no doubt that Steiner saw the expressionist mode as giving him the chance to express the distinctive nature of his ideas in physical form, an alternative architecture for an alternative philosophy.

The celebrated Catalan architect Antoni Gaudí combined a mixture of influences— from Gothic to Art Nouveau—to forge a unique style that can be seen as a form of expressionism. Gaudí’s daring structures, in which walls curve and bulge, columns tilt or splay outward, and features such as towers and windows take on weird, organic forms certainly mirror the sculptural quality of expressionism. However, many of his most celebrated projects in this mode, such as his two Barcelona blocks of luxury apartments, the Casa Milá and Casa Batlló, were both completed under the influence of Art Nouveau before the First World War and the rise of expressionism in northern Europe.

The idea lives on

Expressionist architecture was not a coherent style with schools and manifestos like the Bauhaus. It was more a tendency pursued by a number of innovative architects who wanted to explore the possibilities of modern materials. Unlike the International Style, it did not produce thousands of followers in the mid-century, but it did have an enduring influence. The sculptural forms of Art Deco owe something to expressionism.

And a number of buildings put up in the decades after the Second World War explored the expressive possibilities of concrete and other materials in ways that the expressionist architects would have recognized. Le Corbusier’s small, sculptural pilgrimage chapel at Ronchamp, France, and Sydney’s famous Opera House designed by Jørn Utzon, are both examples of buildings that extend the ideas of expressionism long after the heyday of the movement in Germany.