Richard Buckminster Fuller combined the roles of engineer, inventor and architect to produce a number of innovative designs, the most famous of which were variations on the geodesic dome. Fuller liked the dome because it could cover so much space with so little material, an economy of means that was summed up by the term “Dymaxion,” which Fuller used to describe most of his designs.

Buckminster Fuller was an American engineer who had a gift for looking at the world in a different way from most other people. He produced a series of designs—for houses, a bathroom, a car, a world map projection and, most famously, various geodesic domes— that proved interesting and inspiring to generations of architects and designers, although, with the exception of the domes, they mostly failed to make it past the prototype stage. Fuller also wrote copiously, and came up with a number of memorable terms to describe his work and ideas.

Dymaxion was one of Fuller’s favorite terms, although it does not seem to have been invented by him, but by an advertising man looking for a way of describing one of Fuller’s house designs. It was derived by combining the words dynamic, maximum and tension.

For Fuller it also contained the idea that his designs would make the maximum use of the available energy—he was a pioneer environmentalist who thought that we would all be using renewable energy within his lifetime (he died in 1983). So the term Dymaxion summed up his key interests and, at the same time, reminded people that his designs, although very diverse, were the products of one mind.

Fuller’s first famous project was the Dymaxion House of the late 1920s. It was intended to provide a cheap and effective dwelling that could be erected easily; he also wanted the structure to be light in weight so that it could be transported anywhere with minimal cost. The most refined form of the design was a curious hexagonal structure hung from a central mast. A 10-story Dymaxion skyscraper was also proposed and a model of the house exhibited.

Fuller proposed the radical use of materials in his house designs—the artificial substance Casein for walls, ceilings and bathroom fittings; rubber floors; aluminum alloy for various structural elements. He claimed that the whole structure would cost less than one-fifth of the cost of the average conventional new home.

But the Dymaxion House was too unconventional to catch on, as was its successor—the so-called Wichita House of the 1940s. This was a stunning, circular, metal-roofed design meant to be built by the American aircraft industry and incorporating such innovations as closets with revolving shelves, Dymaxion bathrooms and a clever air- circulating system driven by the wind. Again, it was light in weight, easily shipped and could be assembled in a day by a team of six. The house should have been a success, but Fuller’s company folded because of disputes among directors.

“We have come to the realization that we are in an all-dynamic universe.” Richard Buckminster Fuller, Preview of Building

A similar fate accompanied the Dymaxion car—a bizarre three- wheeled vehicle with many innovative features, but stability problems that led to a fatal accident. Fuller’s ideas seemed destined to fail and, like other unsuccessful architects and designers before and since, he took up a teaching post.

The geodesic dome is a space-frame structure. This is a type of design that encloses space by means of a structure made up of many interconnecting elements that act together as a unity. Space frames can be supported at almost any of the points where the elements connect and they are ideal for spanning large volumes of space with few, or no, columns. Space frames do not have to be dome-shaped. They may be made up of pyramids, hexagons or several other geometric shapes. 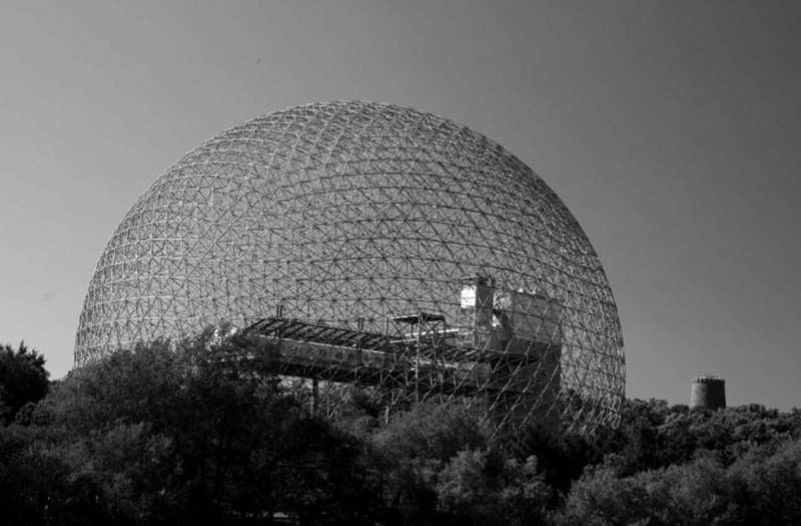 Fuller taught at the whacky, but influential, Black Mountain College, North Carolina. Here he had his students build geodesic domes, the one type of structure that brought Fuller lasting success. A geodesic dome is a structure made up of lightweight rods in hexagons (or other geometrical figures) that join together to make a sphere or hemisphere. Fuller did not invent the geodesic dome, but it appealed to him because it is a very lightweight, low-energy type of structure—you can cover a huge volume of space with a minimum of material using a geodesic dome.

Fuller’s first experiment with a dome made from recycled Venetian blind parts was a failure. It collapsed because the blind slats were not stiff enough. But soon he had worked out how to build domes from all types of materials—wood, bamboo, aluminum, steel and concrete. Fuller saw that a small geodesic dome could form a house, but geodesic domes could also be made much bigger—to accommodate factories or exhibition halls. And it was such vast domes that became Fuller’s most famous legacy.

Although several of Fuller’s first domes were built for the American military, the dome that brought this type of building into the public eye was the Ford Rotunda roof, a 28- meter (92-ft) diameter structure for the Ford Motor Company’s site at Dearborn, Michigan. Larger and more impressive was one of two domes for the Union Tank Car Company. At Baton Rouge, Louisiana, this monster dome was 116 meters (380 ft) across and, at the time, was the largest clear-span enclosure in the world.

Domes such as these gave Fuller a lasting importance as a designer. His lateral thinking, ecological values and openness to new materials have made him widely admired by many architects and engineers ever since.