The general structure of apartment buildings of the modern era was quite stable, its evolution was slow. This architectural type, unlike mansions, is constrained by clear spatial parameters and is subject to a certain unification. Regardless of the development and change of stylistic trends, multi-apartment residential buildings had to meet uniform practical requirements, building restrictions (height, yard sizes) and fit into the environment of a concentrated urban environment.

The planned decisions are determined by the boundaries and configuration of the sites that should be used with maximum efficiency and profitability. The residential floors of the building usually had a repetitive layout, which determined the uniformity and equivalence of its structure.

The phenomenon of an apartment building was the result of an unprecedented forced, planned and violent urbanization of the northern capital. In the central quarters of St. Petersburg, this type of building has been established since the 1760s. Since then, the houses were ordered to be built in the entire width of the plot, “in line” with the neighboring ones, “one solid facade and height”. Thus, the two-dimensionality of the composition, the linearity and perimetricality of the building, the division into a ceremonial street and a “backstage” intra-block environment were predetermined. Eclecticism sought to mask the prosaically monotonous structure of apartment buildings with a complex and rich variety of decor. Some researchers consider frontality and facade to be signs of eclecticism. In fact, these qualities were primarily a consequence of the system of continuous ordinary buildings that prevailed in St. Petersburg for a century and a half.

During the period of eclecticism, the type of sectional apartment building with enfilade-corridor layout of apartments, front and back stairs, service rooms was completely formed. Housing in prestigious areas was distinguished by a high level of improvement and comfort. However, the growth of houses upwards and the consolidation of buildings led to the absorption of the intra-block space, leaving only cramped courtyards-wells. The height of the buildings was strictly limited: no higher than 11 fathoms (23.5 meters), and on narrow streets – no more than their width. So a single horizontal building was formed.

The desire to overcome flatness and monotony appeared in the architecture of mature eclecticism. Even in the houses of late classicism, shop windows and “covered balconies” — bay windows appeared. In many buildings of the 1870s-1890s, the lower tier was opened with storefronts of retail and office premises, and the upper one was united vertically by multi-storey bay windows. These large three-dimensional elements served as a kind of “order” of eclecticism. The contrast of transparent glazing and narrow piers of the lower tiers with the weighty mass of residential floors overturned the usual tectonic canons and established new relationships: light bottom — heavy top. Decorative turrets and domes activated the silhouette, bringing a picturesque variety to the prospects of the streets. At the turn of the XIX-XX centuries, new approaches to the organization of the living environment were outlined. One of them was the enlargement of plots and the increase in yards. Another is the interaction of street and intra-block spaces due to the construction of huge arches or open front yards – kurdoners. The third is a departure from perimetrality, the setting of houses in separate blocks.

New spatial ideas served as the most fruitful ground for the creative searches of the masters of Art Nouveau, embodied in a kind of interpretation of the kurdoner theme, in the techniques of flowing “interiors” of courtyards. Interesting results were achieved in the creation of large residential complexes, the owners of which were increasingly becoming not individual customers, but insurance and joint-stock companies, cooperative partnerships. Such complexes included a developed service sector, differed in the deep construction of spatial composition and even the arrangement of intra-block driveways.

However, in ordinary construction, Art Nouveau, as well as the neoclassicism that followed it, could not escape from the confrontation of external representativeness and “behind-the-scenes” utilitarianism. On the contrary, the increasingly dense use of plots aggravated the dehumanization of the intra-block environment. The crowding of courtyard spaces, squeezed by multi-storey massifs, and the need to open the maximum number of rooms to natural light predetermined the complicated configuration of buildings with kinks, protrusions and depressions. The strong plasticity and pulsation of the masses, the chaotic heaps of roofs communicated a powerful charge of brutal expression to the rudely primitive, but “honest” in its non-veiled functionality of the building of courtyards. There was a spontaneous spontaneous generation of a new structural formation. Due to the unevenness of private-owned development, giant planes and powerful prisms of firewalls invaded the open gaps. This purely spontaneous architecture — or antiarchitecture – seems to be an urban phantasmagoria, full of harsh mysterious expressiveness. 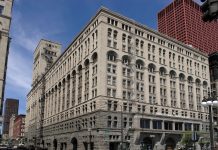