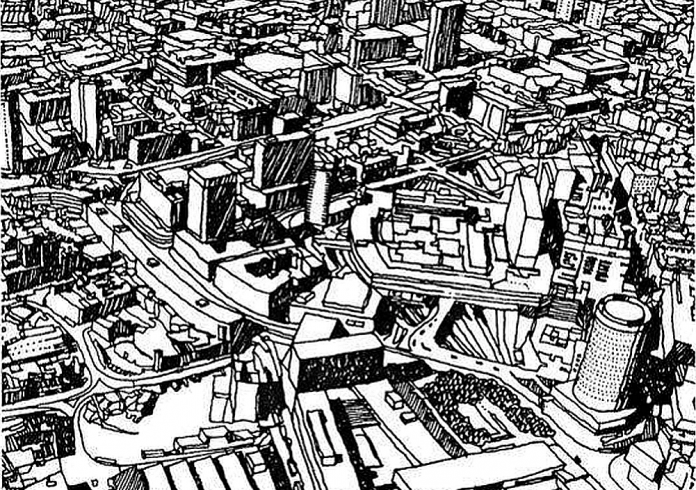 Designers are able to visualise the volumetric arrangement of their buildings simply by conceiving them in terms of true perspective. Sir Christopher Wren was one of the first architects to admit that an understanding of perspective was vital for the design of a building. Perspective allows the architect or designer to anticipate the relationship of the parts of the design without making a model or drawing a line. As we see towns in terms of the routes and streets we take, and buildings in terms of room and corridors, a grasp of linear perspective is a fundamental starting point for spatial comprehension.

The discovery of true perspective was one of the high points of Renaissance art. A handful of artists working in Florence in the fifteenth century stumbled upon the rules of perspective, and quickly exploited it in their paintings. Soon afterwards it was adopted by architects, who arranged their buildings and squares with mathematical precision. The resulting environment seems almost to have the expression of perspective as the central point of the design. Proportional harmony and repeating bay sizes lent themselves to presentation through perspective either in the form of paintings or architectural sketches. Later, in the Baroque period, town planning exploited perspective by creating long vistas of streets or tree-lined avenues ending almost at infinity or terminating with a public building. Without the discovery of geometrically correct perspective, grand designs such as Versailles or the Nash terraces in London would have been unthinkable.

To draw such towns one must understand per- spective, but sketching in the street does not require the production of drawing-board perspectives based upon rotating picture planes and mathematical precision. In fact, these elaborate perspective drawings can become so complicated that they discourage you from drawing on location at all. It is a case of the science of perspective becoming an obstacle to learning the simple principles of perspective.

Indeed, for most subjects it is only necessary to understand the basic rules of perspective – that parallel lines focus upon vanishing points, which are spaced along your eye level. This simple principle applies irrespective of the angles of the object (in plan) or changes in the level of the ground. Of course, if there are slopes or ramps to draw, these are not level and hence have their own vanishing point above or below those for horizontal lines, depending upon whether the slope or ramp is angled up or down.

Single-point perspective is the easiest to employ in the field and the most useful for townscape and landscape drawing. It focuses attention upon the space rather than the object, and for this reason is a great aid when drawing squares, streets and interiors. The buildings or walls at right angles to the observer are simply elevations drawn without angle to left or right. Single-point perspective suits the sketching of towns laid out on axial planning principles, or interiors with parallel corridors and plenty of right-angled spaces. Hence it is very useful for drawing classical compositions, whether in terms of buildings or whole towns. Since the streets are normally straight and often have terminating features at the vanishing point, perspective allows the artist to quickly construct the parameters of the drawing.

With complex towns or groups of buildings, several vanishing points have to be constructed, at least in one’s mind’s eye, because the differently angled buildings will all require their own vanishing point. Since constructing the vanishing points is time consuming, it is better to visualise where they are and check the angles in the field by using your pen or pencil as a guide. By holding the pen at the angle of the wall or roof and bringing it down to the paper via an arc rotated about your elbow, you should be able to check the logic of lines in perspective against how they appear in reality.

Although perspective deals primarily in angled lines, it is useful to remember that the weight of line, darkness of shadow and strength of colour also convey the appearance of distance. As a rule, objects in the fore- ground should have the thickest lines, the darkest shadow and the brightest colour, while those in the distance should have the reverse – that is, faint lines, soft shadows and subdued colour. Attention to such detail not only gives the townscape sketch a certain subtlety, but helps reinforce the sense of perspective established by the angled lines.

There are some further useful tips to add to the lessons of perspective drawing. One concerns windows: those disappearing some distance down the street need not be drawn as compressed rectangles; a simple vertical line will suffice. Likewise, if the detail of, say, paving is shown in the foreground, it is quite unnecessary to attempt to show it in the background, and a mere hint will be enough in the middle ground.

If you are going to depart from full scientific per- spective drawing with its complicated rotating picture planes (not only cumbersome to put into practice, but unrealistic in the field), then you will have to use your eye to fix the depth of elements within the picture. The well-trained eye will in time prove as reliable as is necessary but you can assist it by using a pencil to establish the angle or proportion of height to width (in perspective). By holding the pencil and using the thumb as a sliding measure you should achieve accuracy to within 10 per cent, which is good enough for location sketching. However, once you have est– ablished the bay width or the depth of the building and are happy with it visually (your measurements should always be checked against how it looks), then you will discover that the angle of the diagonal will remain constant. This will allow you to tackle complex subjects such as street arcades or the column spacings in the aisle of a church.

Diagonals can also be used to establish the centre of a wall or building in perspective. By striking both diagonals lightly in pencil (or just fixing them in one’s mind), the centre is quickly obtained and hence other information such as the spacing of windows or location of a door can be added, knowing that the basic layout is correct.

The choice of eye level is important in perspective drawing. If you are interested, say, in the skyline of a tall building, then it pays to take as low an eye level as possible and render the silhouette of the top dark against a light sky. This is how the perspective artists of the 1930s presented their brash new skyscraper designs. Alternatively, if you wish to look ‘into’ the subject, try to use a high eye level so that you can delve down into the streets and spaces and show how they relate to each other from this angle. When portraying a very tall building or lofty interior from a viewpoint where you are gazing upwards, remember that there is a vertical vanishing point pulling the lines together high over your head. Such a drawing is really in single-point perspective, with you turned through 90°.

An understanding of perspective is a great aid to those intent upon drawing architecture and towns. However, try not to allow the rules to dictate your every move, for spontaneity and flair can be driven away by too slavishly following the academic conventions of perspective. Some recent graphic artists such as Paul Hogarth have deliberately broken such rules in order to arrest the eye and encourage it to dwell upon the subject longer. They have developed a system of superimposing objects in space, which accords, to some extent, with Oriental concepts of perspective. However, be aware that if you break the rules of perspective a naivety creeps in that may undermine the overall appearance of the finished sketch, no matter how finely the details are rendered. 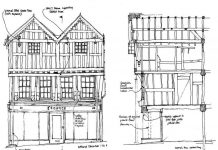