An appreciation of composition is particularly important when drawing buildings and cities. The abstract nature of architecture means that sketches have to be well composed, otherwise the finished drawing may lack appeal, or fail to communicate the qualities that attracted you to the subject in the first place.

Generally speaking, the subject of the drawing should occupy the middle third of the sheet, not centrally placed, but perhaps positioned on the basis of the golden section. The proportional harmony of the golden section can enhance the drawing and give the subject a feeling of repose on the sheet. The subject can, of course, be in the foreground, middle ground or distance. It often helps, however, if the main object of the sketch is in the middle ground with foreground detail such as paving and background silhouette used to establish layers in the drawing.

Since buildings are made of materials of known size (bricks, blocks of stone, curtain walling, etc.), the opportunity often exists to exploit the rhythmic patterns they create. By considering the position of elements in the drawing it is often possible to create interesting arrangements that take advantage of the relative scale of the different building materials. Moreover, as we are all familiar with the dimensions of a standard brick, the use of patterns of brick courses quickly establishes a sense of scale within the sketch.

Often it is possible to fill an area of the drawing with brickwork or tiling, and this can provide a texture to set against more detailed line work of, say, a Georgian window or doorcase. The justaposition of line, shadow and texture can make an attractive drawing, and it is worth taking time before starting the sketch to find a good combination of these elements. A little licence may also be permitted in rearranging the parts or extending (or exaggerating) the area of brickwork in order to produce a more satisfactory final drawing. Remember that good composition may also have been the architect’s or town planner’s objective, and that your sketch is simply bringing out elements of the town scene that already exist, though perhaps looking slightly different in reality.

A good sketch should have layers of information and meaning. By setting elements into the foreground, especially those that give local character, you can convey the atmosphere of a street or urban area. Such details as post boxes, seats or advertising signs can be placed in the foreground, and this not only improves the composition of the sketch but can also give it extra complexity and richness. Remember, too, that knowing what to leave out is also important. Unlike the literal documentation of the photographer, a drawing permits the artist to exercise a discerning eye, adding or subtracting detail to the benefit of the sketch.

Building designers play with various ingredients to produce a satisfactory piece of architecture. They have proportion, colour, outline, texture, harmony, shadow and framing at their disposal. Likewise, artists should seek out these qualities within the object or subject they are tackling, and exploit them in the drawing. After all, there is no better way of getting to know a subject than drawing it, and no better way of remembering what it is really like beneath the surface appearance.

Some modern buildings are highly abstract in appearance and often rather minimal in detail. These buildings derive from the legacy of the International Style, which began in the 1920s and put machine production and functional logic before craftmanship or individual human needs. Such buildings require a different approach to being rendered through architectural drawing than do more traditional townscapes. Here you will find a ruler useful and perhaps a circle template, and the use of dark shade and dramatic highlighting may also be helpful. Similarly, small areas of bright colour may enliven the drawing, and give a dull building a focus of interest. Whatever drawing technique is employed, it is important to think hard about composition before starting to draw, and to try to enter into the spirit of the period of the subject before putting pencil to paper. An abstract modernist building may well suit a cool, almost cerebral, style of drawing. On the other hand, a Brutalist building of the 1960s, with a rough-textured concrete façade (as on the South Bank in London), would lend itself to a charcoal or a pencil drawing using a 6B to bring out the graininess of the surface. Architecture of whatever period has always attracted the artist, and modern buildings are no exception.

It is useful to try to relate the compositional arrangement of the sketch to the theme of the subject. Should you be drawing a city church faced by a square, then both church and square should feature in the sketch since both are probably there in support of each other. In Europe most cathedrals and many town churches are fronted at their west end by a square, and it would be foolish to draw the church without at least hinting at the presence of the square. Consequently, your composition should 6.5 The cliff-like structure of the ferry Norland is broken up by the angled lines of mooring ropes and access gangway. Placing the bollard in the foreground adds to the layers of interest, which reinforce the nautical theme of the sketch. provide space for both, perhaps with church and square linked by single-point perspective. As the square will probably be paved over and perhaps edged with clipped hedges or statues, the artist has elements around which to build up an attractive and wellconstructed picture.

The relative positioning of the different elements, the weight of line and tonal value of each, are all important considerations and should be planned in advance of starting to draw. There is nothing worse than spending a great deal of time carefully drawing an ornate Baroque church to find that you have not captured the spirit of the place through not considering the composition of the picture with due care. Remember that a degree of abstraction or restraint is important – you cannot draw everything, and to select the focus of attention at the outset is vital. This should prevent you from over-working the subject and ending up producing what amounts to a second-rate photograph.

Since the most prominent features of a building are those that form a frame (doors, windows, trusses, gateways), you should incorporate these into your picture. As we move through a building, we have an impression of prospects opening out of bigger rooms viewed through narrow spaces. The transition between rooms is often marked by a doorway that is deliberately framed. Since we experience architecture by passing through these framing elements, they are very much part of the scene and therefore cannot be ignored. Indeed, successful sketches frequently tantalise the observer with a glimpse of a distant, and sometimes mysterious, world through such ‘frames’ – the view through the solid gateway of a medieval town being a good example.

As with all great buildings or fine cities and landscapes, there needs to be an element of complexity and richness in the freehand drawing. Such complexity can be set against the plainness of unadorned surfaces to heighten the drama of the sketch. Alternatively, any repeated surface decoration can establish a rhythm or beat as in music. Searching out such compositions can result in well-informed drawing that not only sustains our attention but also teaches us something about the nature of the place.

As mentioned already, the positioning on the page of the main subject of the sketch is important. A sketch can be either landscape (horizontal) or portrait (vertical) in layout, depending upon whether a panorama or, for instance, a street scene is preferred. Panoramas of cities can be dull affairs – just a collection of roofs and towers – though vertical elements such as columnar cypress trees, factory chimneys or masts can be used to offset the stretching horizontality of the subject. Likewise, street scenes may require some horizontality or shallow-angled lines to counter the tendency towards the vertical. In both cases you should search out shapes and lines to balance the dominant ‘direction’ of subject or layout.

To return to the subject of the town church; if you wish to draw the square in any detail then it is necessary to place the church towards the top of the sheet. This will allow you to pull the lines of the square and its paving towards you, thereby giving the impression that you are looking both ‘into’ the space and ‘at’ the church. This type of drawing establishes a dialogue between object and space, and allows you to consider how the square is used and decorated.

Often a good sketch consists of leaving large areas of the sheet relatively unrendered. A mere hint of lines is usually sufficient and the openness of approach on one part of the page can enhance the level of detail elsewhere. A common mistake is to draw to the same level of intensity right across the sheet, thereby removing the opportunity for tensional conflicts. Since traditional architecture plays on such tensions (for example, the contrast between a decorated entrance doorway and a plain area of wall) and modern architecture often ignores them, a perceptive drawing should seek to exploit these differences.

Try, if you can, to compose your drawing around powerful lines of force within the sketch. These may be the vertical ribs of an office block, the diagonal grid of a steel-framed bridge, or the flowing lines of forestry planting. The structure of a drawing should consist of these dominating linear forces being mediated by secondary lines or areas of shadow. If possible, seek a balance between the primary and secondary elements, or at least soften the harsh linearity of most architectural subjects by drawing in surface pattern or texture.

The inclusion of such elements as people, cars or vegetation helps to counteract the rectangular or linear forms of buildings. The degree to which these secondary elements soften the sharp outlines of architecture depends upon the subject and the effect sought. You may wish to add complexity and contradiction to the subject, or simply accept the realities of a highly engineered environment.

The play between horizontal and vertical lines, and between hard and soft elements, can be developed into triangular groupings on the sheet. By having three points of interest the picture is more easily composed. Instead of, say, the unresolved dominance of the towering lines of a skyscraper, the drawing will have a repose, which may suit certain subjects. Triangular framing does require rather more than a simple sketch; the artist is now moving towards a more detailed drawing, perhaps as a prelude to easel painting.

As so much urban drawing deals with the façades of buildings, the artist should try to add interest to the drawing by giving the observer a sense of looking both into the spaces of the city and at its buildings. The effect can be achieved by pulling the lines of a street or square towards the observer, thereby creating space that is ‘entered into’. The tension that results from the city as ‘elevation’ and the street as ‘stage’ can lead to a sketch rich in ideas about the nature of urban design. 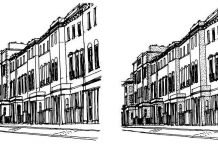